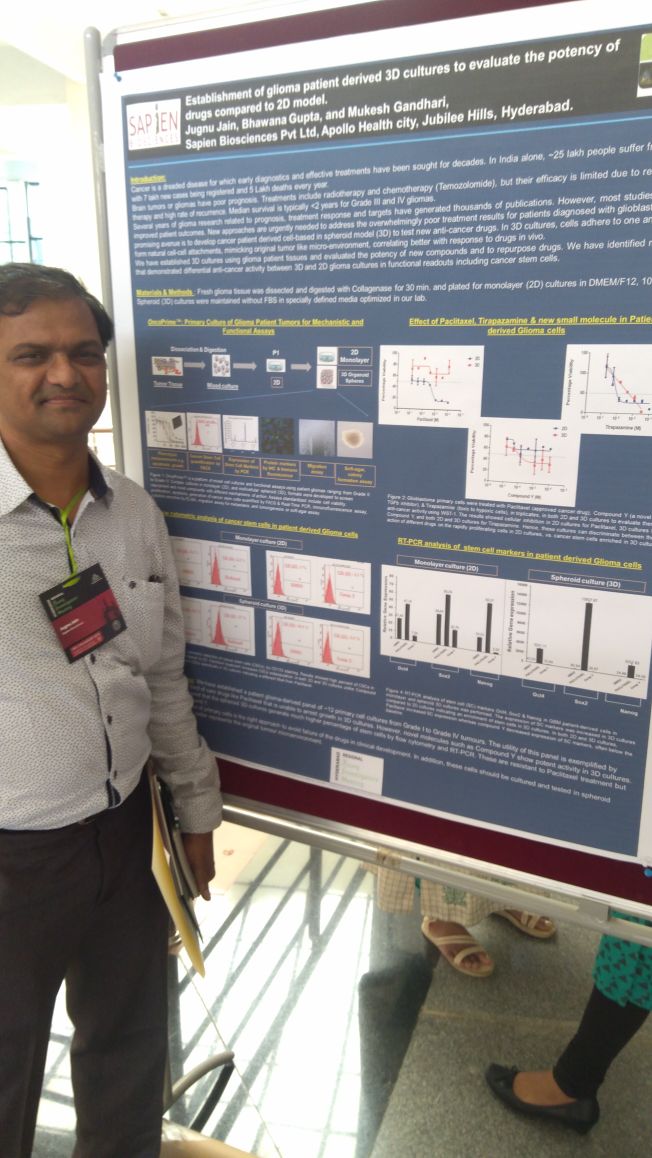 This article originally appeared in 2013

Joint Venture to create a world-class human bio-bank and personalized medicine company, first of its kind in India to enableinnovative research & clinical applications

Sapien has exclusive access to the entire Apollo network for its bio-banking needs but expects to partner with additional research-oriented hospitals and clinics for their personalized medicine and bio-banking needs. Further Sapien has entered into an alliance with Apollo Hospitals that allows Sapien to front-end Apollo’s personalized medicine initiatives. This allows Sapien to bring novel cutting-edge diagnostics to Apollo, either on its own or in collaboration with best-of-breed institutions world-wide thereby enabling world-class healthcare and improving patient outcomes.

Speaking on the occasion, Ms. Shobana Kamineni, Executive Director, New Initiatives, Apollo Hospitals, said, “This is a proud moment for us at Apollo to be a part of this landmark initiative in the history of Indian Health care. Apollo Hospitals has long had a vision of creating Asia’s largest bio-bank which is being realized in partnership with Saarum Innovations. Sapien will help fulfill our vision of delivering better clinical outcomes through bench-to-bedside innovation. This alliance is a further validation of Apollo’s commitment to research-driven health care.”

Speaking on the occasion, Mr. Seemant Jauhari, CEO of AHERF said, “Apollo, through the Apollo Health Education & Research Foundation (AHERF), is spearheading a vibrant portfolio of innovative projects that will enable effective and affordable technologies for better treatment outcomes. Bio-banking & personalized medicine was one such initiative which is being realized with the launch of Sapien Biosciences.

Sapien Biosciences also announces the launch of its first & novel personalized medicine test,‘myPLATELET, which determines patients’ response to their blood-thinning medicationand supports decision-making by their cardiologists to personalize therapy for better outcomes. This is the only test in India that combines both genetic and platelet function response to enable tailored anti-platelet therapy for each patient.

Saarum Innovations has been set-up with the vision of utilizing human tissues, primary cells and stem cells to better understand disease biology, develop novel biomarkers and diagnostics, discover novel drug targets and drugs therapeutics that translate into better clinical successes. It is co-founded by a team of three seasoned life sciences R&D professionals,Sreevatsa Natarajan, Prithi Rajan and Jugnu Jain who collectively have over 60 years of global R&D experience.

In 1983, Dr Prathap C Reddy, the architect of Indian healthcare, launched the first corporate hospital in India. An integrated healthcare company, the Apollo Hospitals Group has over 8,500 beds across 50 hospitals, more than 1200 pharmacies and 100 diagnostic clinics, medical business process outsourcing services, health insurance services, and clinical research divisions with a focus on epidemiological studies, stem cell research and genetic research. To develop talent for the burgeoning need of superior healthcare delivery, the Apollo Hospitals Group has 11 nursing and hospital management colleges. These accomplishments have earned Apollo Hospitals Group accolades such as the Centre of Excellence from the Government of India and recognition from the Joint Commission International (seven of our hospitals are JCI accredited). In a rare honor, the Government of India issued a commemorative stamp in recognition of Apollo’s contribution, the first for a health care organization. Apollo, for over 27 years, has continuously excelled and maintained leadership in medical innovation, world-class clinical services and cutting edge research. Our hospitals are consistently ranked amongst the best hospitals globally for advanced medical services. For more information visit www.apollohospitals.com

Sapien Biosciences, an Apollo subsidiary, to spearhead the introduction of cutting-edge genomic testing across the Apollo network

Sapien was launched in Dec 2012 with the vision of being a world-class biobank and personalizedmedicine company that will bring novel diagnostics to Apollo, either on its own or in collaboration with best-of-breed institutions world-wide thereby improving patient outcomes. Previously Apollo, through Sapien, had launched – India’s first, a personalized test that combines assessment of a patients’ genotype and their platelet function to allow the physician to personalize anti-platelet therapy..
Genomic testing involves analyses of patient genomes and translating insights gained from these analyses to develop better healthcare interventions by way of better prognostic tools for improved disease screening and prevention strategies, better diagnostic tests for optimization of clinical care and better theranostic tests for personalization of treatment.

Sapien has been working with multiple genetic testing providers in India over the last few months to develop and customize these tests for introduction at Apollo. The first of these tests, to be launched shortly, shall be a clinical genomics panel for oncology that is designed to identify the mutations that drive cancer initiation and progression. Insights obtained from this test will enable prediction of patients’ response to their medication allowing the physician to tailor treatment to the patients’ genomic profile. Along with the cancer genomic panels, we will also be launching other panels that will enable differential diagnosis of certain heritable eye and cardiovascular diseases. Such panels will be especially helpful in identifying specific gene mutations in affected individuals. This information can in turn be used to screen unaffected members of their family for early detection and management.

We shall also be introducing, genetic testing within the preventive healthcare context under careful physician supervision and with appropriate genetic counseling support. Apollo has pioneered the preventive healthcare revolution in India and has, to-date, performed over 8.5 million preventive health checks. The advent of advanced genomic analytical techniques has enabled screening for genetic predisposition to various diseases. In this context, tests that identify an individual’s risk for diseases of high relevance in the Indian population (such as cardiovascular, diabetes and obesity) could make a significant clinical impact. Further genetic tests planned for roll-out include single gene panels for specific cancers (such as BRCA1/2, etc.), other disease-specific genetic testing panels (such as diabetes, autism etc.), pharmacogenetic panels (for assessment of response to specific drugs) and peri-natal diagnosis of genetic disorders.

Speaking on the occasion, Dr. Prathap C. Reddy, Chairman, Apollo Hospitals, said, “At Apollo, we believe, that such genetic tests, that are increasingly being adopted world-wide, will have a major impact on the delivery of quality clinical care and we are planning to integrate them into our clinical practice, in a manner consistent with global best practices. I am excited about the comprehensive strategy put together by Sapien to introduce genomic testing at Apollo and I look forward to the successful launch of these tests.”

Speaking on the occasion, Ms. Sangita Reddy, Executive Director, Apollo Hospitals, said, “Apollo has been a trend-setter in healthcare, pioneering the concept of preventive health checks in 1983 and the concept of Personalized Health Checks (PHCs) in 2013. Going forward, we are excited that these PHCs will include an optional genetic test to assess an individual’s risk factors for diabetes, obesity and cardiovascular disorders. Such tests will allow our clinicians to personalize their patients’ health-check follow-up and assess risk factors that can potentially impact their long-term health outcomes.”

Speaking on the occasion Mr. Sreevatsa Natarajan, Co-founder & CEO, Sapien Biosciences said “The comprehensive roadmap developed by Sapien anticipates the launch of various genetic tests over the course of the next few months across the Apollo network, in partnership with key collaborators. At Sapien, we have a highly qualified, internationally experienced team that will play a major role in the systematic roll-out and integration of genomic testing and other cutting-edge diagnostic tests at Apollo. Eventually, Sapien and Apollo’s vision shall be crystallized as centers for personalized medicine across the Apollo network”

Speaking on the occasion Dr. Jugnu Jain, Co-founder and CSO, Sapien Biosciences said “Our experience with genetics allows us to critically evaluate literature and customize tests for Indian patients for optimal clinical benefit, consistent with global best practices and patient privacy norms. Over time, we expect to have a large database of genotype-phenotype correlation for Indian patients that will allow identification and quantification of genetic risk factors, akin to a ‘Framingham Score’, for cardiovascular diseases, diabetes and cancer.”

Speaking on the occasion, Mr. Seemant Jauhari, CEO, Research & Innovations, Apollo Hospitals said, “Pushing new frontiers through healthcare innovation is a key driver at Apollo. Apollo has deliberated introducing genetic testing in a responsible and effective manner. We intend to integrate these tests into the clinical practice at our hospitals with active participation from our physicians in prescribing and interpreting test results within the context of the patients’ overall clinical profile. Further, we are considering creating a comprehensive genetic counseling course as part of Apollo’s initiatives in medical education.”